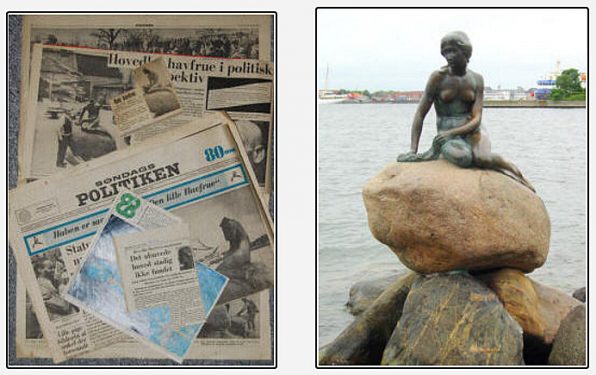 Ballet Enthusiast brewer Carl Jacobsen of Carlsberg was very excited about the solo dancer Ellen Price the Plane artistic performance in the ballet “The Little Mermaid” that he made sculptor Edvard Eriksen portray her as the little mermaid, as a gift to the city of Copenhagen. “The Little Mermaid is one of Denmark’s most visited tourist attractions.

The premiere of the ballet “The Little Mermaid” 26th December 1909

The Little Mermaid. Fairytale Ballet in third acts of Julius Lehmann and Hans Beck. Music by Fini Henriques premiered at the Royal. Theatre on 26 december 1909th The audience admired the very powerful scene events in the first act. Ballet action is taken straight out of Hans Christian Andersen’s fairy tale. “Mrs. Price the Plane unfolded its beauty and poetry filled plastic mimetic ability and danced with the personal grace that only she describes” writes notifier

An expectant crowd had filled the Theatre Royal. Theatre spectators and received H. C Andersen ballet with a strong and unanimous applause. The applause was more music, a ballet. The composer Fini Henriques swung himself baton of the Royal. Chapel and finally be called, than the ballet composition, which dare not be described any renewal of the ballet genre.

The sculptor was firmly in the Royal Theatre and studied the “mermaid” aka Ellen Price to get some ideas for the figure. Many believe that Ellen Price was the model, but actually it is only the head Ellen Price should be a model for the rest of the mermaid’s body should be attributed to sculptor Edvard Erichsen beautiful wife Elina. Eline Eriksen was a model for her husband during the production of approx. 350 hours. The reason that it was the sculptor’s wife who sat model was Ellen Price did not want to sit nude model for Edvard Eriksen.

The sculpture of “The Little Mermaid” was produced in larger than life. Mrs. Ellen Price like the little mermaid without likeness, but equipped with a coy fish tail.
Prior to casting of the figure should sculptor create a mock that the local council in Copenhagen and brewer Carl Jacobsen to approve the
Then made a sales test set. The brewer had originally a plan to the mermaid was placed on an island out in the water. It turned out that this was too expensive and he is dull only to have her placed in the shallows on some boulder.

It is unknown whether it was the brewer, or the sculptor, who was to place her on a rock on the beach at Langelinie, but on 14 September 1912 was “The Little Mermaid” test set out in Langelinie Camera Obseua-man’s house, but you did not think it was an appropriate place. The artist believes that the mermaid must be placed so high and free she can be seen with the horizon as the backdrop. Mermaid was test rig pinched by the wharf and an ugly iron fence. The test rig was found that there should be some changes in the mermaid surroundings and Brewer Jacobsen was even dropped by to see test set-up that lasted a week.

The final presentation of “The Little Mermaid” 1913

The Little Mermaid was finally drawn up and delivered on Langelinie on 23 August 1913 pm. 15.00. There was no celebration. Mermaid came to the spot on a cart upside down so that everyone could see that she was hollow inside. She had a lot of screws in the legs. The sculptor Edvard Eriksen, port architect Erstad-Jorgensen was present and took Carl Jacobsen, who arrived with her mother in law Mrs. Stegmann. The workers lifted it about. 100 kg heavy figure in place. Brewer Jacobsen said … “It’s a shame that you can not get right behind her, so you can admire the hair falling softly over her almost childlike back “…. The sculptor said later in a question and a finding that there’s not much like Ellen Price, to which he replied that it was not meant to be. Lady should only inspire the work.

“The Little Mermaid” has led a turbulent life

Mermaid has over the years many times suffered coats and various happenings, below, brought the key.

In 1955 there was a danger of “The Little Mermaid” on her stones were overturned because of heavy ice packs in the harbor and the sculpture was dismantled in April. Also was used the occasion to get it treated so that it got its original patina back. Stone Setting in which the sculpture was placed at the same time changed.

In September 1961, who painted bra and panties on the sculpture and also, her hair in 1961 painted red.

The Little Mermaid was Saturday night, 25 April 1964 his head sawn off with a hacksaw. They failed to find vandals and the broken sculpture is then lifted away at his rock of stone cutting company Scheller, Hougaard and Petersen. The whole thing weighs just over 2 tons. The vandalized sculpture and stone was taken to the Royal. bronze casts Lauritz Rasmussen workshop so that he could cast a new head for her. The bronze around her neck is about 6 millimeters thick, so it’s been a hard work to destroy the figure. It is believed that it took an hour to cut his head off. The head weighs approx. 12 kg. There are sawn first from one side and then from the other side, only to be broken free of the neck. The original little mermaid, are cast in one piece and it complicates the process of getting attached a new “part” in the figure again. Bronze casters in Rådmandsgade in Copenhagen must urgently casting a new bronze head after the original plaster model. He expects that it will take approx. 6-7 weeks before “The Little Mermaid” returns to his seat at Langelinie in Copenhagen harbor.

The original plaster model of “The Little Mermaid” was until Edvard Eriksen’s death in 1963 kept in Eline and Edvard Eriksen’s home on Klintholmsvej in Vanløse in Copenhagen. Shortly after the vandalism was the original plaster model, however, quickly moved to a secret location. The Little Mermaid should first have been restored with a stucco worker, when she had a broken tail and had marks from the many years of residence in the studio.

The older lady “The Little Mermaid” was vandalized by vandals in the dead of night doused her with paint in a rainbow of colors.

There was the night of 21 to 22 July 1984 for practicing vandalism against “The Little Mermaid” unknown vandals had with a hacksaw sawn approx. 39 cm of the Mermaid’s right arm. Av my arm!

The fifth August 1990 it was discovered that there were attempts to save the mermaid’s head off with a 18 cm. long cut.

For the second time in history lost mermaid head. it happened on 6 January 1998. On the night of the day removed the unknown perpetrators once again head to the world famous statue of The Little Mermaid at Langelinie. Vandalism was discovered by a photographer in the early morning were called out to Langelinie because “something happens”. He immediately called police when he discovered the vandalism. Divers searched for the head in the dock next to the statue’s pedestal, but without success.

The first June 2003 was the mermaid splashed with white paint and September 11, 2003 was the little mermaid vandalized once again. A police patrol discovered that she was in the water next to it and you could see that she had knocked a hole in his leg and wrist were cracked and in addition there were scratch marks on the bronze figure.