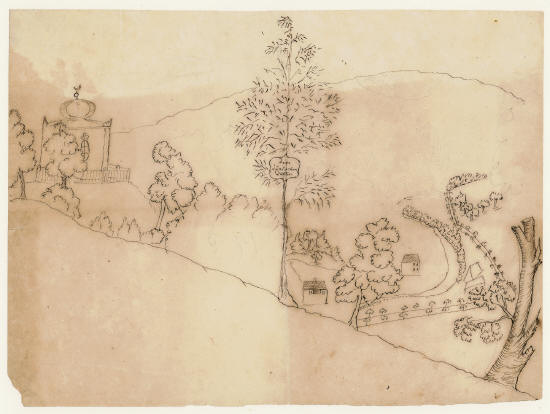 Godfather could tell stories, cut out pictures and draw…

” Andersen’s Tree” outside the garden of Major Serre in Maxen near Dresden bears a plaque with the inscription “Dem diinischen Dichter”, The tree was a young larch which the poet had planted in a rocky crevice, During his frequent visits to the Serre family the poet, who enjoyed the sympathy and admiration particularly of Mme Serre, eagerly watched the growth of his tree, Andersen’s drawing, in the artistic sense one of his finest, was undoubtedly made on August 12, 1851, when he wrote in his diary, “, ..I went out and sketched my tree with the mosque and the fallen birch.” To the left, the mosque-like summerhouse in the Serre garden; to the right, the birch that had been struck by lighting. With pencil and steel pen Andersen has in a finely varied line technique depicted his tree as part of the flowing rhythm of the landscape.